Most days start with a simple conversation… “Hey Kiddo’s what do you want for breakfast?” The response is very innocent but it speaks volumes to what we as parents hear at least 100 times from that point on every single day. “I want ………” fill in the blanks. Now fast forward throughout your day… Something about that phrase permeates everything that we do with our kids doesn’t it? My son is in a constant state of bombardment with all the things that he needs…. And it’s hilarious how a simple IPOD, or XBOX that somehow finds it’s way to the core of his being. He is desperate for the next upgrade, or update which of course costs him allowance money, which always leaves him in a constant state of financial loss… and momentary gain. My daughter is the same way. American girl doll, clothing, gymnastics accessories… it’s a non stop thing. I’d love to say that they’re the ones who are childish and naïve, but funny enough, that sounds a lot like me too. I know “WORSHIP PASTOR ROY” should have it all together, but if I’m being honest I feel like such a fool chasing temporary pleasure all the time. After all, it’s not my children’s fault that they act just like me huh? Wouldn’t we love to turn it all off? That’s exactly what happened on a recent trip to Guatemala that radically changed the core of my families existence, purpose, mission.

You see… I’ve been on a ton of mission trips throughout my life, and every one always leaves me the same, hyped up about getting home and turning this world upside down for the kingdom of God (and regretfully getting my starbucks fix again). This mission trip was different. My children…. The selfish little sweeties that they are were accompanying myself and my wife to a 3rd world country for the first time in their lives. To be honest I was scared to death. What we’re they going to do without their precious Xboxes and Ipods? What about the long drives into the wilderness and no air conditioning? What were they going to do when there was nothing to pacify them, and no one their age that spoke their language? What would happen when they encountered extreme poverty for the first time in their lives? What were they going to do????

They were going to love.

They were going to serve.

They were going to forget their own needs and put others first.

They were going to have compassion.

They were going to hold dirty hands.

They were going to hold crying babies.

They were going to sweat and not complain.

They were going to play games they’d never heard of before because of the joy it brought other people.

They were going to fall down and laugh at themselves… get back up and play again.

They were going to sit in a smoke filled room where their eyes would hurt so they could hang out with children who were hungry.

They were going to be everything that I never thought they could be.

They were going to be …. The hands and feet of Jesus. 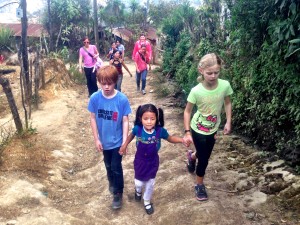 There is something inside of us all that wonders if we could stand in the gap and somehow do something outside of ourselves that is heroic. I know this because for years I’ve felt a pull that I can’t explain every time I meet a child in need, or a parent who’s struggling to provide. Every time I step foot into a mud hut and look at living conditions that are appalling I’m reminded that there is something in all of us that dares to love, to reach and touch, to hug people that we’d consider unlovable. I just didn’t know that it existed in my children.

I watched in amazement as my children embraced hardship to help those who I thought they might try to ignore, but that is the truth of poverty… once you see it face to face, you don’t get a choice… you’re gonna go all in. As a believer it’s fundamental to our faith… Faith without works is dead… In as much as you have done to the least of these…. Religion that is pure and faultless… the problem is that we don’t take the time to see it. We’re busy in our own little worlds… and we also have this haunting thought in the back of our minds: “What if I see it and I still don’t care?” After watching my beloved children, who truly are the love of my life (and also the most selfish people I know) I am more sure than I have ever been that when we encounter injustice… all of us, even the most selfish, will become the hands and feet. Our lives have become so insulated that we don’t have to face the injustices of the world, and therefore we can keep the debauchery of our lives justified as normal. I know… tough word right?? Debauchery… I’m not saying you are doing anything wrong, but I am saying this…. Don’t feel blessed??? Don’t have enough??? Don’t have time??? I dare you to go see it face to face. Check out this video of my children’s perspective of what they saw… and while it’s a moment for me to proud, remember this…. I didn’t know such compassion existed in them until they themselves were face to face with the depths of despair in Guatemala.