If You Weren’t Afraid To Fail 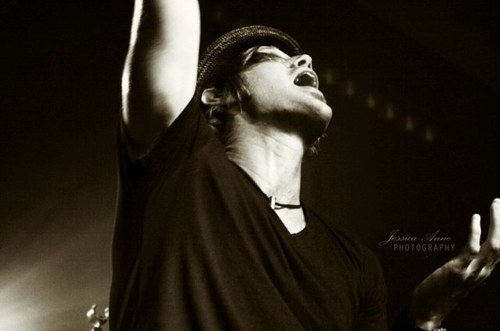 What would you attempt if you weren’t afraid to fail?

It’s a placard on my managers desk.  Every  time I walk in his office I stare at for a few seconds and then try to make an honest evaluation of if I’m living by that creed.  It was right after we had finished the Winter Jam 2012 tour.  Arguably the most successful tour that Building429 had ever been a part of.  48 cities in sold out arena’s all around the country…. And we had the blessing of being on the tour as our song “Where I Belong” began to take the country by storm.  Pretty awesome to watch God move like that.  Yet, coming off of that tour didn’t feel like we were in a chill mode at all.  In fact in the early part of that tour I had already had a few conversations with people about the possibility of us writing for a new record.

I’ve got to be honest… I used to write around the clock… 24/7, 365 days a year.  It left me empty… it left me in a place of constantly chasing the next big song.  It honestly hurt my ability to focus on my family… it was as frustrating and irritating as someone who keeps updating their twitter/facebook status in the middle of a date.  I constantly had to tell myself… “come on Jason, be here, now…. The songs aren’t from you anyway.”   Seriously…. I would run to my guitar any time any crazy idea came to mind out of some obligation to capture every thought… often times hushing children who just wanted to be with daddy while I’d try to write out an idea.  Then one day I came to the idea that maybe I needed to trust this great God that I was writing songs about with the writing of the songs.  That’s when I finally became a real writer.  I got rid of all the noise and stopped writing with every Joe Blow songwriter in a frantic and hopeless effort to write the big song, and started writing with just 2 people and ONLY when it was time for Building to record a new record.  It was the best decision of my life.

Freedom had come in the form of simplicity.

Faith replaced fear and on our record “Listen to the Sound” God showed me what He could do with my willingness to truth him as a songwriter.  That doesn’t mean that I don’t sometimes freak out though.  Honestly at the beginning of the newest record my confidence was a bit shaken just by the daunting task of writing a new batch of songs and getting it whittled down to 10 that would be the new record.  Song selection is like pouring your heart out on 20 canvasses and then allowing your closest friends fire buck shot at the ones they don’t like until there are 10 left.  It’s brutal to say the least because as I say “The writer loves all of his children/song equally”.  That’s a weird way of saying that you pour everything you have into every song and you have to be prepared to hear that your amazing thought processes may not actually be that amazing.

So there I was at Gabe’s (my manager) office when he brought it up.  “Sooooooo”, he said, “What are you thinking about the next record??”  What was I thinking???  I was thinking can’t I have a little more time to enjoy our brand new #1 song??  Haha.    That little placard was staring me in the face and I couldn’t help but think….. that’s it…. Whatever THAT is… I want to do that.  “What would I attempt to do if I weren’t afraid that I would fail?”  What kind of songs would I write.  What sounds would we try?  How far could we push the envelope while staying true to the form that brought us to this dance?  How far could we walk the tight rope???

Well then I want to light a BONFIRE!

This record is meant to energize the masses.  It’s meant to be a bold statement of faith and confidence in a God who isn’t a fable.  He isn’t an imaginary figure.  He’s not something that we made up to make ourselves feel good about our lives.  He’s spent 10 years making us ready for this moment.  We we’re meant to lead… so we’re going to… the cost is irrelevent… the truth must go forth.  So we’re going to incite a little bravado, a little confidence… maybe start a Holy revolution.  That’s the idea and we’d love to invite you to be the Revolution with us.  The meek, the mild, the weak, the lonely, the desperate….. that doesn’t begin to describe the 12 people that Jesus surrounded himself with.  The disciples were strong, courageous…. outspoken, daring men…. And they got A LOT done for the kingdom.  They made mistakes, but they were powerful men of God.  We feel that it’s time for this generation to reclaim the banner of courage and remember that our God is able.  So with that we introduce the title of our new record:

We Won’t be Shaken

Our new record and in my opinion in represents the pinnacle achievement to date of Building429.  We stretched ourselves in ways that felt like natural progressions…. But with new sounds that would’ve been completely foreign on any of our first 4 records.  We feel that we’ve brought the best parts of Building429 into this new record whilst leaving some of the extra noise behind.  Some will say “Well Jason, I’ve heard you say that before and we’ll just have to wait and see if it’s your best.”  I understand your skepticism, but in a career that has stretched longer than anyone thought it would we have never been so supremely confident in God’s plans for Building429 to LEAD.  This year will be a banner year for us. I am sure of it, but it will only be that because of what God has done… not us.  In fact, there is 1 song on the record that may seem a bit out of place at first, but I encourage you to pay close attention to it.  It’s the very last song of the record and it says this:

Turn my world upside down

Turn it all inside out

You take the least, and make them first

Pour yourself on those who thirst

You use us when we are weak

You use me because I am weak

Its Here I find

You lift me up Just to lift you high

This never was about me

It’s only that I’m in your hands

It never was about me

You’re the author of it all

And so I live to make you known

You make something beautiful

You use me because I am weak

You’re will above my own

Your glory is greater

You’re story will be told

God wants to turn your world upside down, as He has ours, for His glory.  But He can’t do that if don’t consistently lay it all on the line.  You can’t be lazy and you can’t be scared.  God can do amazing things through people with faith the size of a Mustard Seed.  So what will you do?

What WOULD you attempt if you weren’t afraid to fail?

What would YOU do??